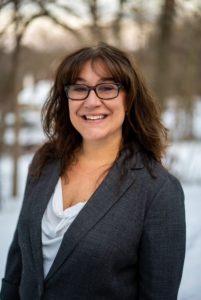 DeRosa has been active in the BRI for years. DeRosa served as a Vice Chair of the BRI’s Apartment Owners Advisory Council (AOAC) from 2016 to 2020 and as a member of that association’s Board of Directors from 2006 to 2020. She has also been a member of the BRI’s Negotiating Committee during its Labor Contract Negotiations with Local 32-BJ Service Employees International Union (SEIU).

She was first elected to the BRI’s Board of Trustees in 2016, and has served as Secretary since 2018.

“My goal is to bring the BRI to the forefront on all real estate matters and give the organization a greater voice,” DeRosa said. “Whenever an issue occurs in the building and realty industries, I want the BRI to be the ultimate source in the Hudson Valley. We have so many useful resources and an abundance of knowledge. Many of our members have issues that need and deserve to be highlighted and addressed by the media and legislators. I want to amplify our members’ voices and give the BRI a larger spotlight.”

“We are thrilled to have such a strong leader with such deep ties to the BRI family at the helm as our organization gets ready for what Westchester will look like post-COVID,” said Tim Foley, Executive Director and Executive Vice President of the BRI. “Lisa’s story is the story of the BRI. She knows firsthand what it really looks like for a small business and family-run businesses to build and operate multifamily apartment buildings in Westchester. She knows exactly what it means to keep them afloat in good times and bad, and how to maintain safe, secure, and affordable homes that working families in White Plains depend on. We can’t wait to share her vision and her story with decision makers in White Plains, Westchester, Albany and beyond.”

DeRosa’s journey in the building and realty industry actually began when she was 13 years old.

“I was in the 8th grade, and we were learning about how to properly address an envelope,” DeRosa recalled. “I noticed the return address was one of the buildings my father had built and went up to my teacher after class and informed her.  She said she ‘would only live in a DeRosa building,’ so I mentioned that he was building townhouses in the next town over.”

“Sometime later, my father came home and handed me $250, which was a substantial amount of money in the early 80’s. When I asked him why he gave it to me, he said that my teacher went into contract on a unit and that when she closed, I would receive the other $250.  My real estate career was born right there, and my teacher bought a house on a street that was named after me, ‘Lisa Court.’”

The BRI has been a recurring theme in DeRosa’s life. She hopes that she can take the advice her father had given her about being in a leadership role and make a lasting impact during her tenure.

“My father always told me, ‘A busy man is never too busy,’” DeRosa said. “To me, that means that there’s always time to listen. Listen to everybody, and then make your own decision. But listen first.”

DeRosa knows that as the first female President in the BRI’s history, she’ll bring to the table what no one else has done before.

“We always hear the term ‘glass ceiling’ when it comes to women. That we shouldn’t aim too high because we’re living in a male-dominated industry. But women bring a lot of different perspectives that are completely different from men’s. And I think it’s extremely important to have equal representation on all fronts to truly represent the society that we live in.”

With the COVID-19 pandemic well on its way to lasting until 2021, DeRosa understands that her tenure as the President will need to bring about change and adjustment to the organization during unprecedented times.

DeRosa officially began her term on December 9, 2020, when she took over the position of BRI President from Vincent Mutarelli, who as Immediate Past President will be Chair of the Board of Trustees for the next year.

The Building & Realty Institute of Westchester and the Mid-Hudson Region is a building, realty and construction industry membership organization. The association, based in Armonk, has more than 1,800 members in 14 counties of New York State. Those members are involved in virtually every area of the building, realty and construction industry. The BRI will mark the 75thanniversary of its formation in 2021. The association was formed on February 11, 1946.

Send me an email when this page has been updated!

Our services extend to all facets of the Building and Realty industries. Stay current with all of the events and planned meetings of The BRI. We encourage you to apply or renew your application for membership online.
Become A MemberRenew Membership